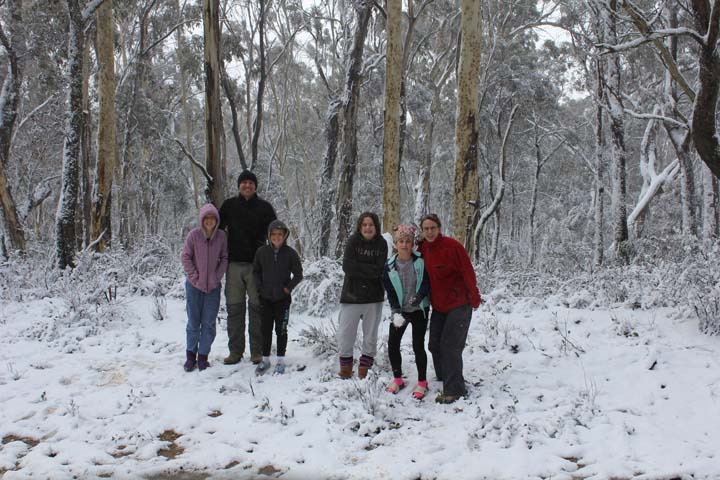 We had decided that Yerranderie was just a little bit too far to travel after school pick up at 3pm on a Friday, so we let the kids have the day off! We left about 10am, travelling over through the mountains, then down into the valley from Mt Werong, finally arriving at Yerranderie a bit after 3pm.

We had the pick of the ‘free’ camping ground as there was no one else around, it was still a hard place to find a spot as there is a very gentle slope throughout the whole camp area. We finally chose a fairly flat spot and set to work to set up before, what looked like, rain in the distance as there were some very dark clouds approaching, it was also rather windy, making set up slightly more challenging than normal.

Dinner was pre-made curry, which we heated up over the fire using the tripod, we cooked some rice and before long, we were sitting in front of the fire, warming our insides with a delicious hot meal. It was still a very windy evening, but now clear, with the clouds all blown away making for a great night of star gazing and satellite spotting. We had read that the temperatures were going to plummet over night, so it wasn’t long before we all headed off to the extra warmth of bed, the kids all doubling up with their sleeping bags.

Unfortunately for everyone, it had been a very windy, noisy night, so it didn’t seem like there was much sleep had by any of us, we didn’t take off at all, but at times, it felt like we were going too!

The normal lazy morning prevailed, with cups of tea, breakfasts and coffees sitting in the sun, out of the wind, which was still hanging around. We set off on an adventure by mid morning for the kids to see the old town of Yerranderie, starting first at Yerranderie Cemetery. Yet again, they were surprised, when reading some of the headstones, just how young some of the children were. I think they find it hard to imagine how life would have been around the times these young children died, with no medicine on hand, no 24 hour medical centres, no technology, no cars to get them anywhere, they like to think they understand how barren and hard it would have been, but still can’t quite get their heads around it.

We then headed off to the the old mining site, passing rather large chunks of timber that had a wood splitter amongst the piles. Keira, Zarah and Kye all attempted to split some wood, but not very successfully, actually struggling to hold the splitter up to swing in the first place!!!

The mine was a fascinating place for them to see, with huge slag heaps to climb and admire the view from the top. They were also amazed at how deep the mine went down, not imagining how people actually worked down them. We spent quite a fair bit of time looking around the mine before heading back to the old town of Yerranderie for a look.

Back at the campsite ready to get the fire going to cook dinner and hopefully warm up a bit as with the wind it was rather fresh. We were having roast pork rolls, so we needed some good coals, we were all ready for some afternoon nibbles and drinks.

Dinner was delicious although we didn’t get any crackle from the pork this time, which was a little bit disappointing for everyone. We sat around the fire all trying to get warm, but also trying to stay out of flames way as it was still windy, so another sleepless night ahead, with the trailer canvas making lots of noise with the wind. The kids all enjoyed marshmallows, each with their own way of cooking them, burnt, not burnt, or not at all!!

We woke to no wind, which was nice, but it was really cold, no snow though, which had been forecast throughout the region, we had even mentioned it to the kids, to maybe be prepared for the white stuff! We had breakfasts, teas and coffees, before starting the packup of the trailer ready for the trip home.

We travelled home, making our way towards Oberon, then back over the mountains. As we had prepared ourselves for snow we were slightly disappointed not to see any for quite a while, Megan spotted a small amount first, surprising us that they actually look out the windows and not constantly on their devices.

We continued towards the finish of the Oberon Colong Historic Stock Route, where the snow seemed to be getting thicker and thicker, much to the kids delight.

Unfortunately the wind we had over the weekend made it somewhat unpleasant, both during the day and especially at night, but the drive home with all the snow made up for it all. The kids were so excited to see it, so we had many stops along the way for snowball fights, photos, cold feet and hands and lots of fun, turning a windy weekend into a fun filled winter wonderland.