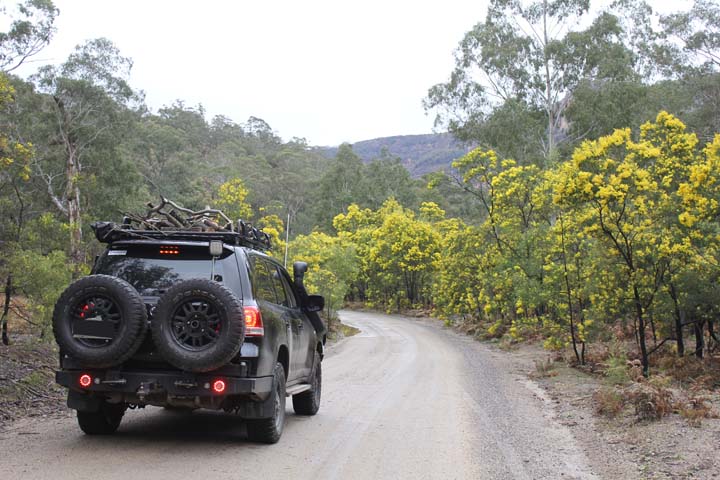 We decided to pick the kids up from school before 2pm, so we could be on the road hopefully before the build up of traffic on the M2. Our plan worked just, as there was only a small amount heading towards Richmond.

We had chicken snitty wraps for dinner in the truck as we knew we wouldn’t get there in enough time to cook something. There were very dark clouds to the south of us the whole time we travelling along the M2/M7, with lots of lightening in the distance, looking very menacing. We only got a very small amount of rain which was lucky considering the very dark sky that was looming.

Made it to Newnes by 8.30pm, with only a few other campers in the area we go which is just across the creek. There was lightening in the background, along with the deep rumblings of thunder, which made us rush that little bit faster while putting the trailer up, with the kids all pitching in.

We had 10 mins to spare after setting the trailer up, ready for bed before the heavens opened and down it came, hail, thunder, lightening and rain. It was over before it started, hard and fast, but still lovely to lie in bed listening to the thunder and light drops of rain.

Awoke to a rather damp grey day, which was fine as we were going to take it easy for the day. We all rose at different times, having breakfast when we felt like it, the coffee pot was on a few times, with the kids now liking a weak cup!!

We decided to do the trek up to Mystery Mountain the next day so headed off instead for some firewood, so we could get it going earlier in the afternoon. We drove back along the road for quite a while before stopping at a few places to grab some timber for our fire!!

Back at camp the kids got the ball out and played a bit of touch footy after lunch, not really for warmth, as it wasn’t terribly cold, but just for something to do. They did make a little friend from the next campsite that was rather keen to join in!!

There was wildlife a plenty, with kangaroos, wallabies and wombats wandering around the area, the wombats looking very fluffy and healthy, more so than we have seen here before.

Jase and I struggled to get the fire going, actually, it took us a long time as the timber was rather damp, as was the undergrowth and the ‘small’ stuff you need to start a fire. Took us a bit, nearly giving up and saying to the kids, ‘no fire’, ‘no dinner’, but eventually we got it going and turned into a cranking fire.

The fire was beautiful, as the evening was getting a wee bit cooler, so the warmth was delicious. We cooked chops over the coals with assorted char-grilled veggies, which everyone enjoyed. The rain stayed away, to reveal a very clear sky, hopefully staying clear for the rest of our weekend. Megan, Keira and I went to bed after cups of tea, while Kye and Jase stayed up and listened to the footy on the radio, it was nice to be in bed.

It was a beautiful morning with blue skies and a slight breeze, making for great conditions to head up to Mystery Mountain in the late morning, after breakfast and coffee’s of course. We got ready then headed off, looking for the ‘cairn’, showing us where the walk started. It was a very steep climb, straight up, with a narrow track, then turning into rocky steps, making it’s way up the side of the cliff faces.

It was a tough track but the kids managed it, even towards the end where it was really steep, rocky and windy. We didn’t make it to the top, but for safety reasons we decided to pull up just short of the summit, as it weaved around the cliff face, headlong into the strong wind. Our campsite was the tiny little speck in the bottom clearing. We stayed up there for a little bit, taking in the views before making our way back down, which was going to be harder than walking up, I think.

It seemed a lot steeper heading down hill than it did going up, easier on your lungs, but much harder on your body. We all made it down safely without anyone having a stack, always a good thing. We tried to work out where we had walked too from the bottom, but it was too hard to tell, it did look a long way up though.

We had lunch, then unfortunately started the pack up of trailer, ready for the trip back to Sydney. We have such a routine now that it gets done quickly and everything goes in it’s own spot. We were finally set up and ready to leave by just after 2pm.

The drive home was uneventful, with no traffic, even coming into Sydney which is surprising. Even though it was a short weekend away, it’s still nice not to be in the rat race of a big city. Looking forward to our next trip, with the planning of it also exciting.