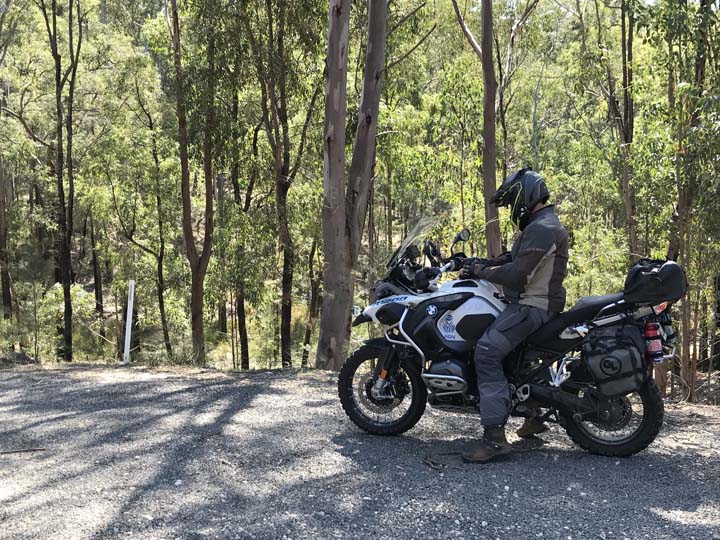 We were away by 7.30am out on the M2 and M7 and through Windsor onto the Putty Road for our first coffee stop at the Grey Gum café. We arrived about 10am for a coffee and I took a fancy to a rocky road cheesecake with ice-cream which I had to have. There were a few bikers about, mainly roadies, but the occasional adventure as well.

We headed off around 11am for the turnoff to Commission Road that would hopefully bring us out somewhere around the back of Denman. This wasn’t too bad a trail for the big bike, although a couple of sandy patches did give us the odd scare when we first hit them. Its surprising that you travel a few km’s up a dirt road and you think you are way out in the boonies and all of a sudden there are properties and houses in the middle of nowhere. Makes you wonder when they have friends over, how do the give the address? We passed a few bikes coming the other way and they said the trail wasn’t bad at all further on.

We decided to detour off to our left and head down to have a look at Sheepskin Hut, which was down the end of a dead-end track, about 15kms off the direct route. It was in pretty good condition, and would make a good night’s camp, although we’d imagine it might get quite busy as it gets warmer as it is pretty accessible.

We backtracked to the main track and continued north, the track now quite an easy fire trail, we started descending into escarpment country so figured we were towards the end of it, and eager to see where we come out. We ended up at a gate that signified the end of the trail and crossed through a paddock and onto Appletree Flat Road which was at the back of Doyles Creek. I hoped that we would come out closer to Widden, more along the Bylong Valley Way but tracks appeared to be gated or nonexistent.

We continued on and made our way up over Cox’s Gap and into Bylong just after 4pm. We stopped at the store for a coke and then continued along Wollar Road and through Ulan past the giant Wilpinjong coal mine. We were then stopped at the level crossing for a coal train to go through, lost count after 70 carriages! I think they are also extending this coal mine as the road diverts sharply just after the crossing, and you can see where the road used to go, now fenced off and leveled. We came out onto Ulan road through the tiny hamlet of Ulan and then 15min down the road bought us into Gulgong just after 5pm to our accommodation at the Prince of Wales Hotel.

Its always nice to arrive while it’s still light, we unpacked, showered and went for a quick walk up and down the main street before settling down in the bar for a beer. It was NRL semifinals so we grabbed a good table in front of the TV and ordered our meals. I don’t normally talk about the food much but the menu was great, a very big selection of things and also at a pretty good price, we shared a pizza and ribs, had a couple of beers, then after full time it was off to bed.

We were away quite early, heading for Wellington about an hour down the road, here we fueled up and stopped for a cooked breakfast and a coffee. We were going to head out to lake Burrendong, which had been in the Sydney news lately for its lack of water currently 4.9% full. It was sobering sight to see a flat virtually empty expanse where water should be. We got chatting to a local and she told us that back in 2016 the dam was at 120%. So in the space of 3 years they’d managed to empty it! We get her views, politicians sitting in nice big high rises in Sydney… no idea what it’s like out here!

I had also read that it was predicted that the Macquarie river would run dry in the next month or two. I thought the river crossing would be quite easy. It’s a fairly long crossing strewn with rocks, we’ve crossed it before in the truck so we did know it. To our surprise it still had flow and depth, it was going to be a challenge to cross. I got Nyree to ditch her boots and pants and walk across to see the depth, as the water was dark and with the flow you couldn’t make out the bottom. It didn’t seem too bad, it was up to her knees, the problem was going to be the rocks. We decided that I would just take it myself and basically walk it across, just as I started 2 fellas came the other way and came straight across, one on a Husky 701 and the other on a 450 Yamaha. They stopped and it turned out to be father and son. The son jumped in and gave me a shove all the way across, top bloke! We were across, what a relief, you don’t wanna drop a fully laden GSA in a river!

Up the other side and we traveled through more grazing land to come out at Hill End for a well-deserved beer at the pub. It was past 2pm, we thought we’d head back the quicker way by Sofala, Turon Gates and Capertee as opposed down the Bridle track to Bathurst.

We had a good run home along Bells Line and rolled back into the garage just before 7pm knocking off 930km.

Cobar, oh and a selfie, the first visit riding thr

Overlooking Broken Hill. And no, I haven't lost th

Our recent trip, way more to come. He looks happy,

Throwback to June 2020. I panicked having to go ac

Throwback June 2020. And what a sunrise that was.