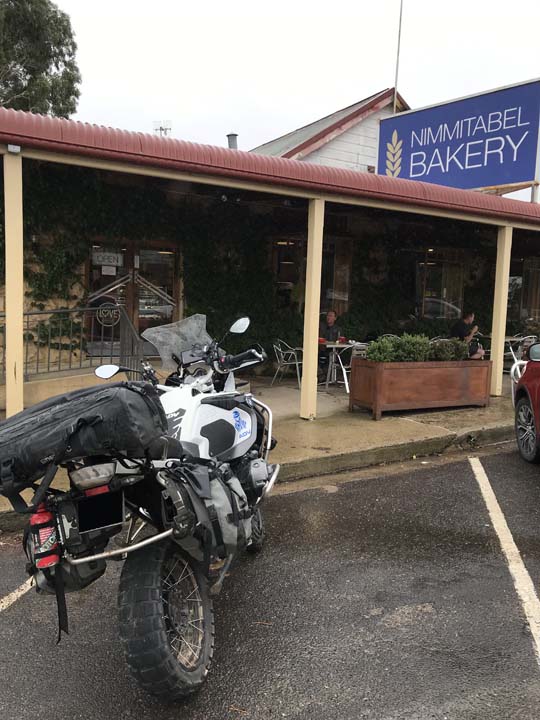 We headed off Saturday morning with a fairly loose idea of where we were going which is unusual for me as I usually have distances, times and places all mapped out and recorded. We got away around 9am and headed down the Hume and turned off at Goulburn for Tarago. We stopped at the Loaded dog at about 12.30 for a beer and a break. On reviewing the map we decided that we would head down through Namadgi National Park and spend the night at Adaminaby. We would then ride across through Cooma and down into Cobargo and home back along the princess highway. We thought we’d do our bit for the bushfire recovery and try and spend some money in the places affected.

The phone said the weather was about to turn and it looked like we were going to head straight into it. We got going and got a decent downpour just before Bungendore. It then stopped, but as we made our way down to Queanbeyan it was very dark ahead and lightning was in the distance right where we were going. We decided to stop and fuel up at a servo and wait it out.

It was a good call as it absolutely bucketed down for about 20mins. As quickly as it came down it stopped and we were on our way again. There were mini flash floods everywhere, every hillside had streams running down them. When we turned off at Tharwa for Tuggeranong, there was a school oval that was a lake, kids were already out on their bikes towing each other on boogie boards. We even had a couple of water over the road sections to negotiate.

We continued along Naas Road towards the entrance to Namadgi National Park and were met by a sign just outside the Visitors centre saying the road was closed. We could already see everything burnt and figured it must still be under repair from the fire damage. 2 4WD’s drove past and continued on down the road so we rode into the visitors centre and came across a ranger just getting into his truck. He said that we would be able to get through, just take it easy, we thanked him and were back on our way.

We climbed up into the park, now onto Boboyan Road and everything was destroyed, signs, reflective post melted, every tree charred, everything black. Nothing was untouched, the fire obviously just came through and took everything in its path. We continued on and the road finally went to dirt until we came to Hospital Hill lookout and stopped and looked out! There were great view back towards the Brindabella’s, everything still burnt and black and it looked like we were going to cop another downpour before the day was finished.

We continued on into increasing drizzle and came to David Brayshaws Hut at Shannons Flat. We would usually stop and have a look, but the rain was getting heavier and the skies darker. We continued on and eventually found our way into Adaminaby, arriving about 5pm. The pub looked welcoming and there were quite a few people around enjoying a beer. Unfortunately, quite a few was too many and they had no accommodation available (as said, very unusual for me not to have booked). We had no choice but to head to Cooma as it was the closest and most likely to have accommodation.

The rain came down again but being on bitumen, we made good time and arrived at the Alpine Hotel just after 6.30pm. We stay here on the way back from Moto GP each year and love this pub, luckily, they did have a bed for us, so we parked the bike out the back, showered and settled in for a meal and a few beers. We both went the lamb cutlets, which is Nyree’s usual, but new for me as I always go the ribs. A big meal and a few beers later and we were ready for bed after a long-wet day on the bike.

Sunday dawned clear with a little bit of fog, we decided to head straight away and stop for a big brekkie/brunch in Cobargo. We headed out through Countegany and turned off towards Cobargo (which was the only way as the road to Big Badga was closed). There was a council worker manning the closure so we stopped and had a chat to him, he said they were still clearing trees from the fires. We also told us that not far over the hills to our west was where the air tanker had crashed.

As we headed down Tuross Road it started to drizzle, making it just that little bit more tricky on the wet dirt. We continued on to Wadbilliga Road which would take us through Wadbilliga National Park and this would eventually bring us out through Yowrie and into Cobargo for brekkie. Just after turning in Wadbilliga Road which crossed through private property, we came to a crossing of the Tuross River, it was flowing and looked pretty sketchy, there was an old fella having a look for a fishing spot so we had a chat to him and he said that a 4WD had got recovered from here last week. He said that the bottom was nice and sandy so it should be ok. And on that advice, we decided against it, truthfully though it wasn’t doable on the big bike.

So, our plan B now became to get down to Bega via coming out on the Snowy Mountain Highway somewhere. We headed south through Kybeyan and onto Old Bega Road and eventually onto the Highway. About 5kms down the road out of the mist coming towards us was a flashing light, the vehicle stopped us and the Ranger advised that there had been a rockfall ahead at Browns Mountain, and there was no way through.

So, no choice but to use plan C, we turned around and headed back up the highway, it was now raining and meant that it was time to stop at the Nimmitabel Bakery for breakfast finally. After a great coffee and pie we were on our way again back to Cooma (which we had left about 3hrs previously) and up the Monaro to Queanbeyan. It was surreal to see that the fires at Namadgi that we had ridden through yesterday had actually come down onto the highway and crossed it at a few spots.

We pulled into the bakery at Bungendore around 1.30pm for another coffee and then headed up through Bungonia and Marulan, before turning off at Tallong and following the Highland way through to Mittagong and back onto the Hume for an uneventful drag back home arriving just after 5pm.

I suppose this weekend ride was about getting out and having a look at what the fires had done, and trying to spend a few dollars back in those communities that had been affected. Unfortunately, we got turned back by natural obstacles and weren’t able to see first hand what we wanted to, and spend a few bucks. We did see enough though to confirm what see all saw on TV, and hope to get back down there soon to spend a few dollars.

Throwback June 2020. And what a sunrise that was.

Throwback June 2020. My favourite pic of this trip

Throwback June 2020. Third time we have visited an

Throwback to June 2020. What a beautiful, peaceful